Part of the servers will be merged.

This will give a boost to the population, and create more vitality on the server.

The merge is planned to take place on Friday, April 9 in the maintenance, Coordinate Universal Time(UTC+0).

Please check the details below. 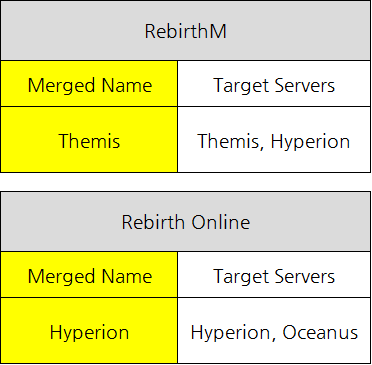 1. Select the merged server name on the login screen and connect to the game.

A. If the number of characters registered in one account is 4 or more in both servers, except for the 4 characters to be used, the remaining characters must be deleted before entering the game.

A. With the server integration, the names of the characters will be changed at once.

※ You can connect the game only by changing the character name.

※ The changed character name will be displayed normally when reconnected.

A. Friends who have made a relationship will remain the same.

※ The changed friend's name will be displayed normally when the friend reconnects.

A. If you have characters on two servers with the same account, the slots in the account warehouse will be merged. (Up to 100)

B. The default 10 slots for the Storage are applied.

★ When each characters' Storage slots are expanded and the total number of slots exceeds 100 after merging servers, the Gold Carat used for slot expansion will be sent by the mailbox.

★ If you have more than 100 items in the Storage, the items may be retained but not shown.

In this case, if you move the items in the Storage to your Inventory, hidden items will appear, so you do not have to worry.

A. The Guild's name will be changed.

※ The guild name does not have a preemption authority, so priority is given to the guild that has been changed first.

※ Only the guild leader can change the guild name.

※ The changed guild name will be displayed normally when reconnected.

A. Rankings are initialized after merging servers, and rankings are calculated again.

Thank you for your great support.